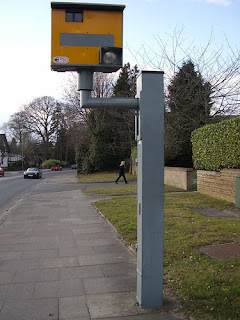 I was elated to find this story today.  It’s a step in the right direction, data revealed and proof required that speed cameras work in order to expand them in UK.  And while they won’t scrap their existing cash cow, they are setting precedents for other countries, like ours, who may look to these devices.  Here is the story from theNewspaper.com:

The UK Conservative Party, widely expected to replace the Labour government at the next general election, yesterday announced that it would continue issuing two million speed camera tickets each year. Shadow Secretary of State for Transport Theresa Villiers announced plans to tweak the current photo enforcement system while rejecting calls to scrap the devices altogether.

“It’s time to put a stop to Labour’s cash cow camera culture,” Villiers said in a speech to the Conservative Party convention. “Ladies and gentlemen, a Conservative government would not fund any new fixed speed cameras because they are not the best way to make our roads safer.”

A freeze on the existing number of cameras would still leave Britain with 1.2 speed cameras for every 10,000 in population — more than nearly any other country in the world. The proposal allows for an expansion in the total number of cameras as long as local officials meet certain requirements when adding devices.

The Tory reform proposal would also require the publication of a complete annual report with statistics on the performance of each speed camera. Speed camera partnerships would be dissolved. The Conservatives also promised to end the Department for Transport’s pro-speed camera marketing and advertising campaigns and replace them with support for alternative road safety strategies.

“The truth is the fines [speed cameras] generate are blinding Labour to the proven merits of other better ways to keep our roads safe: like education, like vehicle activated signs, like traffic police,” Villiers said.

The promise of a new focus drew optimistic support from advocacy groups fully opposed to the use of automated ticketing machines.

“If this policy becomes a reality, we hope that a return to intelligent and proper road safety messages might begin to repair some of the last seventeen years of damage,” said Claire Armstrong, co-founder of the Safe Speed Road Safety Campaign. “Focusing on the wrong road safety policies and messages prevent the correct ones from being implemented. We must ensure that road users understand the need to be responsible for all their actions, and that they are encouraged to seek ways in which to improve their abilities, skills, knowledge judgment and attitude.”

The Association of British Drivers was particularly pleased by the pledge for greater transparency.

“We are delighted that the Conservatives are breaking ranks with contemporary, negative thinking on safety and congestion,” ABD spokesman Nigel Humphries said. “For too long, badly thought out policies have obstructed our roads and penalized safe driving, and the mandarins in both town halls and Whitehall have been able to fob off legitimate objections by keeping the data they have collected under wraps.

Thank you to TheTruthAboutCars.com for the tip on this story.