I pulled the carburetors off first.  They were probably clogged from years of sitting.  The left one had a small gunky drip that was a clear indication the float wasn’t working.  When that happens the bowl overflows and the engine runs like crapola.  Consequently, people park the bike worried over an expensive carb rebuild and then Groosh comes in to swoop up a 3,300 mile original bike for cashews.

Culprit: the rubber gasket between bowl and carb body had gotten squeezed over time.  It was just enough to interfere with the float’s performance.  A set of new gaskets trimmed up a bit, problem solved.  Now onto the stripped out bolt in the bottom corner of the removed cover plate (lower right corner of bike next to the exhaust header).

You’d think that Philips head screws would be the sweetest way to put together bikes.  Who ever strips a 40 year old screw?  You mean Honda didn’t think that far ahead?  How about they simply looked next door at the car shop.  I’m pretty sure they put together the engine on the S600 Coupe with a 10 outta 12mm hex bolt.  Maybe they got the idea from Triumph who put together their cases using the same Philips type screws.  Someone must have been one hell of a sales guy.

The feel-good-news of the day is that I didn’t strip them, the guy before did.  Another reason the bike probably got the heil-five.  The cure has been three fold.

– One, drilling out the screw head until it breaks off
– Two, pop the cover and grab the shaft with vise grips
– Three, buy a used case half from eBay for $20 bucks with screws removed

The reason all other screws haven’t stripped on me?  You’re as good as your tools.  I bought a #3 Philips head that fits like tighty whities.   Coupled with a breaker bar and snap, crackle, pop… those bolts are getting replaced with allen heads. 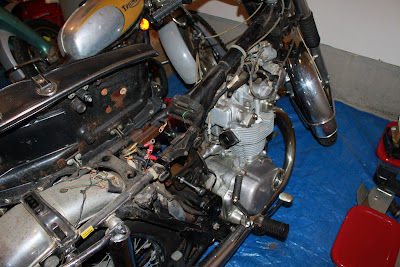