The 1969 Lincoln Mark III has a six foot long hood and is classified as the longest on an American car by HowStuffWorks.com. Motor Trend on the other hand says that the 1969 Pontiac Grand Prix takes the long prize as do most of the other write ups I’ve found on the topic. However, none of them actually say how long it is?! What is the obvious next question when you state the longest hood on a production car… how big is it? I’m guessing 6′ 5″, 6′ 9″ with the afro. If you can find the dimensions, please do tell. Because when push comes to shove, a few extra inches of hood is much needed livin’ for laying out at the party at the Moon Tower. Everyone’s going to be there, you should go. (Take the Dazed and Confused Quiz).

Between the two cars, I must say I’ll take grandma’s grocery getter over the 1/4 mile burn out turned Pontiac’s embarrassment any day. I’m actually thinking of buying a 1979 Mark V which lead me down this path to begin with. Why? Because my wife thinks I’m already insane so why not tack on a car that fits the bill. The pimp-mobile Cadillac-wanna-be coming from Florida, where all mediocre cars go to die, would certainly draw a crowd. And they are so darn cheap. You gotta admit, rolling with the homies might be alright… as long as you don’t have to open the doors to let people out of the back seats. Yikes — with giving of the door dings, I apologize in advance to all those with inferior short hoods that I park next to. 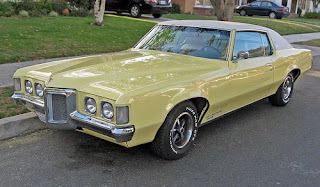 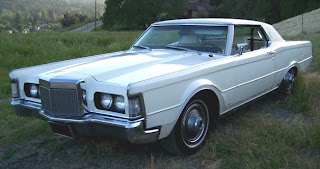