When I used to live in Seattle, a good friend of mine drove a Toyota Tercel. It was the same car he’d had since high school and suffice it to say the chicks didn’t dig it anymore now, than they did back then. It was A to B transport at its finest. A car you never had to worry about: reliable, trustworthy and loyal. Little did it know, it was on death row.

Darren decided he wanted a new car, times were looking up from basement living at his friends house. No pun intended. Darren was the 110 employee of a little known company called Amazon. With new responsibilities and a new lease on life, he needed to be driving something that represented. But the Pacific Northwest doesn’t look too kindly on people who don’t reduce, reuse and recycle. So how do you get rid of the perfect transportation vehicle without looking like your are wasting it? You kill it… slowly, quietly and shamelessly.

It starts off simply enough. The car didn’t get washed, vacuumed or otherwise cleaned. You don’t change the oil, or for that matter add any oil, ever. Don’t love it, caress, talk to it, high-five the steering wheel for a good pass on the freeway or commend it for avoiding a chipmunk. To kill a car you need to ignore the check engine light, forget about changing the brakes or air cleaner, put the cheapest, worse-brand gas you can find in it and by all means park it in bad neighborhoods at peculiar angles with a sign that says “kick me” taped to the back.

Did all this work out for my buddy? Hardly. This was a Toyota. It wanted to live. In the end, he found new respect for his Tercel like you find after getting into a fight with a bully. But just like with that bully, you realize there was a reason you got in the fight to begin with. You were two different people on two separate paths, doomed to part ways after the affection was turned towards a new. 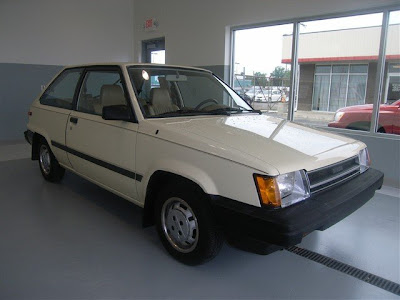