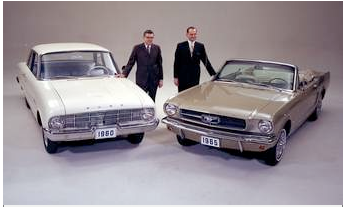 Donald Frey, a senior product planning manager at Ford Motor Co. in the 1960s who along with Hal Sperlich and Lee Iacocca developed the iconic Ford Mustang, died on March 5 in Evanston, Ill., from a stroke. He was 87 years old. Frey led the team at Ford that set out to develop an affordable, sporty car in the early 1960s.

With Ford reeling from the Edsel flop, Frey couldn’t get a standard budget for the project. So he piggybacked on other programs–borrowing the platform and instrument panel from the Ford Falcon–to create the Mustang. The program was created in just 18 months. The original Mustang debuted on April 17, 1964, at the New York World’s Fair. Managers expected to sell a bit less than 90,000 units the first year, but sales topped the 400,000 mark.

Over 8 million units sold since 1964, the Mustang lives on for a few more gallops. It will be interesting to see how much longer this American Icon will continue to remain in the stable of Ford’s offerings.