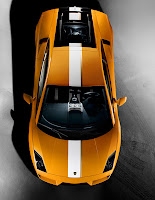 Lamborghini is releasing another variation of the Gallardo, this one called the LP 550-2 Valentino Balboni. For whatever reason, I don’t really follow Gallardo, maybe too many people in Hollywood “thinking they are with one”, but this one caught my attention. “-2” is for two wheel drive, as in the rear two as in stick shift and rear-wheel drive. Nice.

Valentino Balboni is Lamborghini’s test driver and likes it that way. Hence there, two forth, they named the car after him. I think we need to put in a call to Valentino.