This weekend, June 13th & 14th marks the 77th running of the 24 HEURES DU MANS. It has to be the single greatest endurance race in the world. This will be the first year to use the new ACO. These rules will be progressively put into place between 2009 and 2011, with essential directions for the future of the race in terms of sporting equity, safety, reduction in costs and in terms of 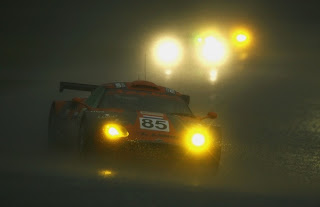 sustainable development. As they say, “more than ever, the 24 Heures du Mans will be in tune with the times.” Here’s a quick recap of the rule changes:

• The power of diesel engines in LMP1 will be reduced.
• The engine power of LMP2 will be reduced.
• There will be a comparative investigation into the performance outputs of the petrol stock block engines and the petrol race block engines.
• Both LMP1 and LMP2 rear wing configurations will be reviewed.
• Arrangements will be made to increase significantly the time needed for wheel changes.

An additional note states: These measures aim to reduce the performance of cars, but also to ensure a balance between different types of engine and maintain the gap between LMP1 and LMP2. I guess being blown out by Audi diesels for so many years will do that to you.

My focus, as I became captivated by this endurance challenge, has been on how the drivers train for such an event. I realize there are all types of rules around driver changes and total time spent behind the wheel for safety concerns. But back in the day, drivers drove the distance. I’d have to start my training program by also driving 24 hours, straight.

In 1996, I had my opportunity. I had taken off from Seattle with little more than a change of clothes and some snacks for one of my afternoon drives/bike rides and kept going… all the way to Michigan. Living spontaneously! Plus, I had had enough of my business partner’s wife and it was time for a change. Yadda, yadda, yadda and I left Michigan to go to LA to visit some friends, then back to Seattle. I took the long route from Detroit up to Mackinaw, biked the island, cut through the UP, crashed somewhere up there and then headed diagonal to LA. This was my big chance.

I’m not really sure how long I was driving before deciding to start my “training” but when I did, I established some rules; caffeine, blasting the radio and slapping of the face were all permissible. Was I speeding? Not anymore than normal, this wasn’t a Cannonball. It was dark out and I wasn’t wearing sunglasses. As anyone who has driven long late nights can tell you, mile markers and truckers are about your only companions. Long stretches of road turn into black abysses while the oncoming headlights seam to somehow dance across the road sideways causing the reactionary jerk of the wheel to avoid sugarplums dancing in your head.

I think around hour 19 or 20, I really started feeling the effects of sleep deprivation. I wasn’t so much as counting the minutes as I was counting the miles from rest stop to rest stop. “Oh well, there goes another one, I guess I’m committed to another 53 miles.”

There is no ill fated wreck at the tail end of this story. I didn’t drift to the side, wake up going backwards, hit some parked car or side swipe smokey. I did make the decision that 23 and 1/2 hours was about as close to the hand grenade as I was going to get and pulled over, reclined the seat back and awoke five hours later to finish the trip into LA. Le Mans, I am no where near better prepared for you but at least I can say I tried.