It pretty hard to knock Porsche off of the pedestal I’ve built for it in my garage, my magazine and in my dreams.  When a stiff wind blows, I stand at attention for the marque.  However, yesterday when completing research for the Tatra reference in our latest feature story, I came across this in Wikipedia:

“It is believed that Porsche used Tatra’s designs since he was under huge pressure to design the Volkswagen quickly and cheaply. According to the book Car Wars, Adolf Hitler called the Tatra ‘the kind of car I want for my highways’.  Ferdinand Porsche later admitted ‘to have looked over Ledwinka’s shoulders’ while designing the Volkswagen.

Tatra sued Porsche for damages, and Porsche was willing to settle. However, Hitler canceled this, saying ‘he would settle the matter.’ When Czechoslovakia was invaded by the Nazis, the production of the T97 was immediately halted, and the lawsuit dropped. After the war, Tatra reopened the lawsuit against Volkswagen. In 1961, the matter was settled when Volkswagen paid Tatra 3,000,000 Deutsche Mark in compensation.”

Dr. Porsche was no fan of war and attempted to remain as politically neutral as he could, preferring to keep focus on his cars and factory.  He was still a prisoner of war when the numbers “356” were first put down on paper.  He had been in and out of French prisons with Anton Piëch until August 1, 1947 while Karl Rabe and Louise Porsche-Piëch kept things going at Gmünd by supervising the repair of prewar VWs and VW bucket cars.

It’s impossible to say how the pressures of war and Hitler would actually play on one man’s need to copy or even steal.  This was not something I was familiar with until yesterday and while some of you may already have know this story, it rubbed me sideways.  This was different than hearing the president lied or cheated.  I’ve come to expect that from people in power.  Ford stole intermittent wiper designs and I’m sure manufacturers have been stealing technology from each other for years.  Nothing new but Dr. Porsche… how could you? 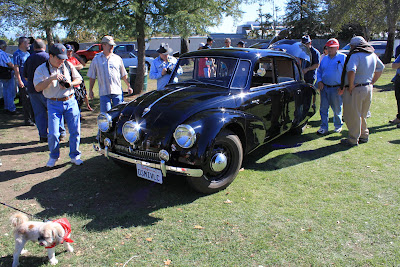