Okay Paul, you brought it up…Would you buy your first car again?

My first car, that I researched, dreamt about, and bought with my own hard-earned money, was a 1990 Eagle Talon TSI AWD – in Arrest-Me-Red thank you very much. And I can tell you, HELL YES I would buy it again.
Think about this, 2.0L Turbo Charged 4, AWD, 195HP, 5 Speed Stick, 0-60 in 6.6 seconds, with head turning looks…and a hood scoop that was real. You can’t find all that in today’s Lancer or STI, come on, this car was so far ahead of it’s time… http://en.wikipedia.org/wiki/Eagle_Talon 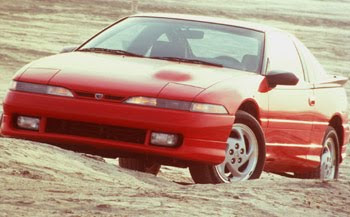 Acceleration wasn’t the only fun I had in this car, but I once blew the doors off a Mustang 5.0 – and not just once. We first dragged off a light, I beat him, he then tried to roll me through the second, I beat him, and then he tried to just stay on it…I beat him! He was so pissed that he eventually got in front of me just to shake his fist at me…ooo, tough guy. Never did see him again.
Lets talk a second about anything but dry pavement. My car could handle snow and rain like a pure bred rally car. Living in Michigan I had the chance to take it through 3 inches of snow on the freeway, driving faster than I should have – but what else do you do when you’re 21. Donuts were fun too, you wouldn’t rotate around the front or rear axle like most cars, this one would swap ends, so you could do a donut within 2 parking spaces… spin until your passenger was sick and then just let off the gas and is snapped back into line.
I once saw a sticker put on the passenger side window of a Talon TSI that said it all, “Get in, Sit down, Shut up, and Hang on!!”
The reality is that today, if you can find one, they are worth about $1,500 in the best of condition. Most of them have been driven into the ground and are beyond repair. Could I buy one in hopes of restoring it, yeah probably but it will never be the car I once owned.