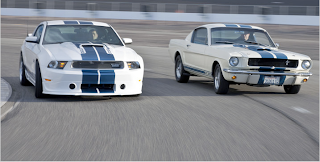 Shelby American wasted no time coming up with its own take on the new 2011 Ford Mustang. Officially dubbed a concept, the 2011 Shelby GT350 will go into production later this year with few changes.

This is essentially an aftermarket package that you purchase after you plunk down the $30K for a Mustang GT. It includes a supercharger that pushes the new 5.0 V8 to around 500 horsepower, a set of Baer brakes, 19-inch Cragar wheels and “super sticky” Goodyear tires Shelby says. The suspension also gets new springs, struts and sway bars from Ford Racing along with adjustable camber/caster plates.

Shelby says all GT350s will be white with blue stripes. Not sure if that means you have to start out with a white car or not but it probably helps. Shelby also adds a new front fascia, revised taillight treatment and a center-exit exhaust. All this for only $34K — that’s on top of the original car, not total. So you’re looking at a minimum of $64,000 for a Shelby GT350. Hope you like white.

Take what I would like to call the “Shelby Challenge”. Count how many times the Shelby name appears on this new product.

Under the hood: (10) top, right and left side of the supercharger, valve covers, left and right side, aluminum filler caps, three in total, cold air intake cover… and lastly, metal serial numbered badge

Hmmm, I come up with 39 locales that Shelby has his name plastered on…that should just about ensure that even a blind person can determine via touch that this vehicle was in some part doctored up by Shelby America. This is without the old man’s signature on the passenger side dashboard…which everyone and their brother seems to be having him sign before his ultimate retirement for a collectible up-tick in value.