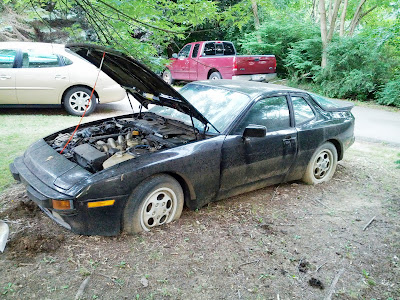 Last week I bought a 1987 Porsche 944S (first year for the S with the 16 valve head) that had been sitting for quote “3 years.” But since the tags expired in 2005, I’m going to go out on pole and say sitting for eight.  The owner parked it after the engine lost power.  It still turned over and ran but wouldn’t go anywhere.  He had it towed home.  I’m thinking blown head gasket vs. timing belt.  But either way, fixes aren’t cheap.  The plan is a parts car because with 164K miles, it’s going to need just about everything.

It was parked under trees up to its axles and came home with the chipmunk that was living inside it.  Yes, the chipmunk made the 30 minute trailer ride and said howdy when I opened the hood in my driveway.  We had a stare down for what felt like a minute before I said don’t worry little guy, I’ll try to make it painless.  It’s been three nights of traps to no avail yet the food was taken every time.  Chipmunk!

Most of the under hood wiring, vacuum hoses, radiator hoses and other bits were chowed by the critter.  The spark plug wires are a distant memory of what they used to be.  Surprisingly, the paint cleaned up pretty well.  My wife even said that car looks good.  You know when the wife notices it ain’t so bad.  I spent most of the weekend shedding wire and critter nest poundage.  The car was once loved as evidenced by six Boston Acoustics speakers/tweakers, two Blaupunkt 6×9″ in boxes in the back, two Pioneer mids in the doors plus full Clifford alarm system.  I’ve always heard about “not buying a car with an alarm system,” now I know why.  Backing it out is a bitch only made slightly easier by a chipmunk who got hungry.