This is what I love to see.  The people taking it to the streets!   How come I didn’t hear about this until after the fact?

“Nearly two dozen gather on North Side, urging drivers to honk to protest communities they say are using cameras to boost revenue rather than reduce crashes.”

Full Story – Valentine’s Day captured passion of another kind — the ire of Chicago motorists who joined a nationwide protest Sunday against red-light cameras.

Nearly two dozen protesters armed with posters took over the southeast corner of Addison Street and Western Avenue. They called for drivers to honk their horns to protest communities they say are using the cameras, which snap photos of drivers running red lights, to generate revenue rather than reducing crashes.

Scott Tucker, who organized the protest and is the Republican candidate for the 11th District state House seat, said he’s supporting pending legislation to rid automated ticketing machines in Illinois.

“It’s a quality-of-life issue,” said Tucker, 37, of Chicago’s Roscoe Village neighborhood. “It’s taking money out of our pockets and putting it into a wasteful government economy rather than keeping it in the free enterprise system” and creating jobs.

Chicago Department of Transportation spokesman Brian Steele said the cameras are “first and foremost about safety” and have been since the city launched the program in 2003.

Rostelle Reese, 56, of the city’s Grand Crossing community, said he has received three $100 tickets from running red lights and is scared that he’ll be rear-ended if he slams on his brakes when a traffic light turns yellow. But it’s either that or risk getting another ticket, he said.

“I don’t know whether to have an accident or continue through,” Reese said. 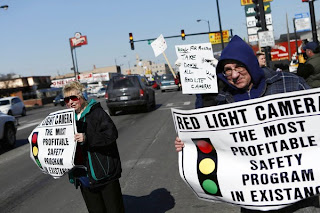