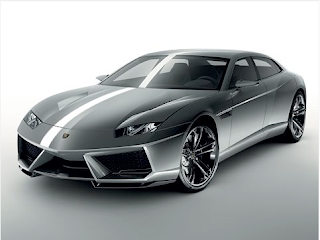 “The exotic car business is quite volatile,” stated Lamborghini CEO Stephan Winkelmann. “So three legs are invariably better to stand on than two. That’s why we have been thinking for several years about a third model to complement the Murciélago and the Gallardo.” The dramatic Estoque, revealed in concept form at the Paris auto show is to compete in the segment with the likes of the Porsche Panamera and the Aston Martin Rapide, both of which it would follow to market, in 2012. This has become a very interesting race to grab high-end market share for those who wish or can afford to have an exotic four-door performance sedan. Not a new concept seeing Ferrari and Maserati have presented four-door sedan models on and off for several years in a very similar fashion.

This is in some ways similar to the latest push to reintroduce to the markets a superficial need to have a hatchback sedan. Audi’s A7 Sportback, BMW’s 5 Series GranTurismo and yikes the Acura ZDX are in the midst of rolling out their mainstream versions. I’m curious to see how the US consumer may react to this new convergence of a sports car, four-door sedan and the utility of a hatchback design. Can someone please tell Acura that the cheese slicer or beer bottle opener looking grille has to go?