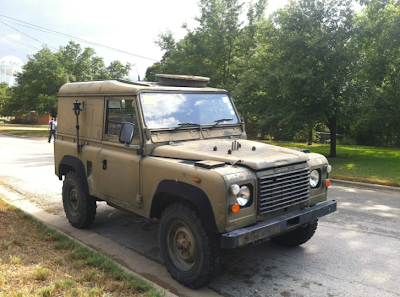 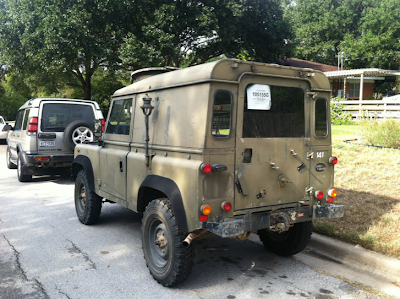 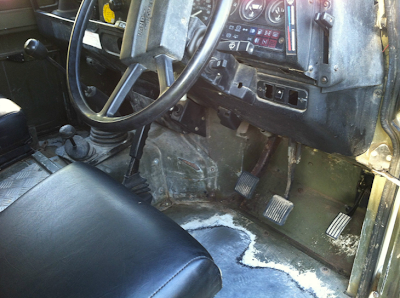 “I am proud to place up for sale a very rare and unique ex mod land rover defender 90. Only a handful of these were produced with a turret hatch. I believe this is the only one in the states. I could be wrong. But when was the last time you saw a landy 90 with a turret hatch bombing it down the highway? I have been driving it around where I live (bryan, texas) and it drives real nice. Smooth diesel 2.5 and the lt77 gearbox shifts very well. Everything works as it should. For a 25 year old defender this has to be one of the best frames that I have seen in a long time. No splitting of metal and everything looks solid. I also like the fact its fully original and nothing has been coated to hide any imperfections and problems. I think you know what I mean? When sellers spray 500 layers of undercoating to hide any problem areas. Slight scrape to the passenger side door skin. If push comes to shove I can replace the door. All doors do look great inside. No bad rusting. I was thinking of repainting the Rover but I think it looks great as it does. Just released from the middle east. This is pretty much as I received it from the MOD. A very nice, sold and super rare defender. It is RHD from factory. My daily driver here in TX is a RHD 90 and its never really bothered me, however you can convert over to a LHD. Each to their own.
Also if you really hate the turret just remove it and convert to a soft top. Exmoor trim have some great conversion kits.
This Rover comes with a new clean and clear texas vehicle title.”
Every time the guy mentioned turret my mind kept going to the torch things on the side of the vehicle and thoughts of skulls, rat rods or the Munster Koach.  As it was, there was a rerun of American Pickers on last night where they visited Barris Kustoms in California.   Barris built the car for the Musters show.  On quick perusal of his site, I can honestly say I don’t care for 90% of his designs but this one below is pretty cool.

“This car is a ground effects machine and rides on a five inch cushion of air and can run on land or water, has no wheels, transmission or rear end. Plus, no frictional moving parts. Air is drawn in through the front and rear openings into the open plenum chamber with outlets through a combination of peripheral jet inserts…

…Power is two jet aircraft starter motors 24 volt D.C., 4 horse power that turns 40,000 rpm at 300 amps. This is reduced 8 to 1 to absorb the amount of load combination of horsepower. Balanced 20 inches cast aluminum fans push 11,800 C.I.M. free flow & under ₖ″ static water pressure has 7,600 C.I.M., dry weight of the car is 422 pounds including all the accessories. Movement is obtained by a revolving jet nozzle which has an air thrust to the right, left, forward, reverse and stop…

…Body paint of nitro cellulose lacquer 35 coats of imported swedish pearl of essence which is made of crushed fish scales and added crushed diamond dust, then colored in Kandy translucent red, white and blue.”