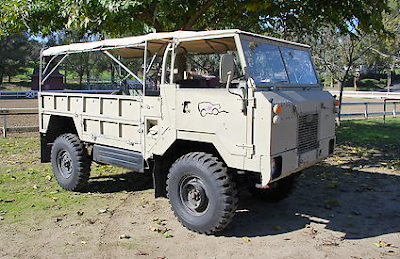 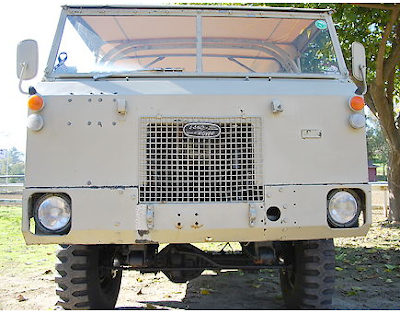 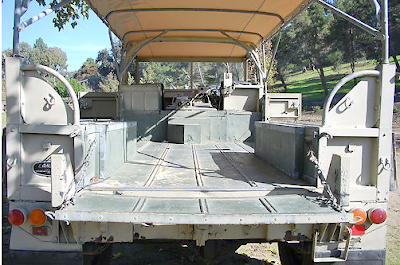 This one is $5K cheaper than the Swiss military vehicle I posted earlier this week but looks about the same.  Funny, I was thinking I would like to paint the other one something other than green and here you go, beige.  I’m not sure any other colors would look right on these vehicles.  Something about them commands bush or sand colors.

On eBay in San Clemente, California for $7,500 to start the no reserve bidding.

“This right hand drive 101 fwc was originally deployed to Hilton, England from the factory where it was maintained and parked in the stables ready for battle.  It was then imported for the movie studios in the LA area and has also been in a few movies. I am uncertain how long the car has been here but it has no rust anywhere. There are only 45k original miles (75k kilometers) on the clock. This rare 101 is 1 out of 2,500 ever made and one of the few that have landed on this side of the pond.
All the maintenance has been done by OC Rovers where the vehicle was also thoroughly inspected to make this truck a dependable daily driver as well as expedition ready.  Some of the services performed include overhauling the carburetors, clutch and brake master, the fuel tank has been removed and sent out to be cleaned, the old Lucas points have been substituted with an american brand electronic ignition to increase the dependability.  All the coolant hoses have been replaced as well as the water pump, fan clutch and the belts. The radiator has been serviced. Tires are in good shape. All the gauges and switches work.  The 2 front seats have been recovered and a bikini top has been added. This vehicle is very capable off road as well as on the freeway as the other Land Rover vehicles such as the Defender, Range Rover, Discovery and LR3. It is a truly unique vehicle and gets much attention wherever you go.”