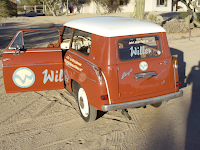 “1961 Lloyd Alexander “Kombi” TS 600; museum vehicle; built by Lloyd Maschienfabrik GmbH; Bremen;Germany.  Powered by a 592 cc. air-cooled 4 stroke engine; 4 speed transmission; rack & pinion steering; front wheel drive. This model was built between 1957 – 1961; this is one of he last; if not the last built. One of the prior owners was a well respected auto restorer in Germany. This was his personal vehicle used in his restoration business. Later; Lloyd was purchased by Borgward; and then assumed by Siemans.; This example is a well restored and maintained example of a virtually dis-appearing marque. Runs and drives very well; gets lots of attention where ever it gos. A very small example of the current “grocery Getter” Better milage then a “Prius”;; and more fun!”

I particularly like in the background the slammed Impala looking wagon in the driveway and the Dodge Ram crew cab with the hood up (Picture No. 2).  Set the stage for previous ownership, no?