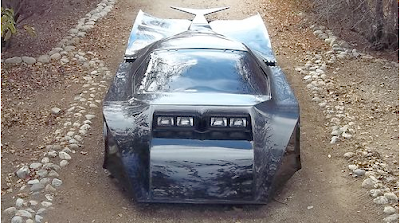 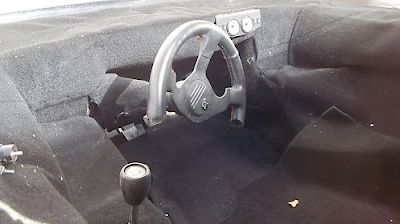 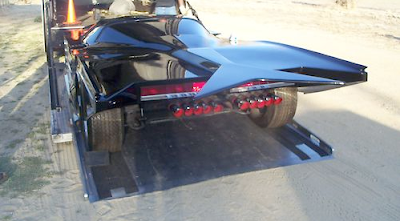 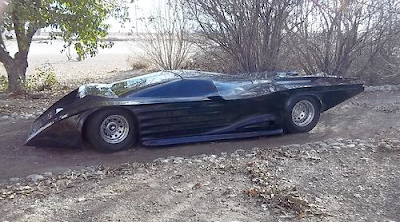 “Here is a one in a life time chance to own the ULTRA EXOTIC GRX INTERCEPTOR built by custom car GOD TOMMY “THE GREEK” MOUZES in the early 1990’s. Car is 18 feet long 6 1/2 feet wide and 38 inches tall, all steel body with a 375 hp 350 cid chevy. Car has air bags and will raise 12inches. I have documented photos of the car when it was on display in the chicago auto show at MicCormick place priced at $1.8 million. car is a prototype a 1 of a kind please ask any and all questions before auction not after, car has never been titled and is sold with a bill of sale, will post some more pics with engine and underside/Cheers.”

I must be watching too many Property Brothers episodes because I see potential instead of the ugly stick this was hit with.  Reshape the front with new headlights set up front, get wheels that don’t belong on Chevy pick ups and put something other than trunk felt in the interior after adding an interior.

The current owner does absolutely nothing to help his cause in selling this thing.  The pictures are for crap.  How about posting the engine?  Doors open?  The seats?  Does it seat one person, two, three?   The best feature is the tail, more pictures of that would be nice.

On eBay in Lancaster, California.  The Buy it Now is $40K after bidding failed to trip the reserve and stalled at $20,500 once before.

February 11, 1993|By Jim Mateja, Chicago Tribune
CHICAGO — If you have $1.8 million burning a hole in your pocket or purse, the Chicago Auto Show in McCormick Place has a one-of-a-kind GRX Interceptor on display that could relieve your fiscal anxiety.  Not only is it the most expensive vehicle on display, but the highest priced machine ever to be exhibited in the show’s 85-year history.

Tommy ”The Greek” Mouzes, who designed the vehicle L ”from my head without even using a blueprint,” said the only Interceptor he will ever build and sell is ”a work of art meant for eye appeal.”

As sometimes happens with art, some will see blemishes where others see beauty. Mouzes, for example, had to put labels on the carpet under the car so viewers could tell the front end from back. Another flaw: the 375 horsepower V-8 engine obtains a mere 4 miles per gallon.

The person who buys the car will have to spend a tad more than $1.8 million. The federal luxury tax of 10 percent on the amount of the sale that exceeds $30,000 requires the lone Inter-ceptor buyer to pay an added $177,000 tax, or about the price of a Rolls-Royce Silver Spur sedan.
Until Interceptor, Rolls had the highest price tags at the show. At the other end of the spectrum, the lowest priced car at the show is the Hyundai Excel hatchback coupe at $6,454 after a $250 rebate...