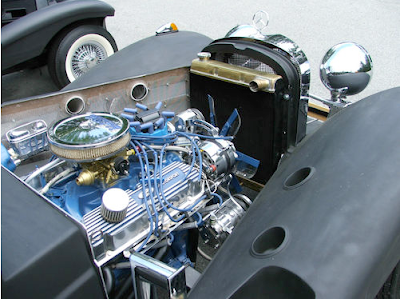 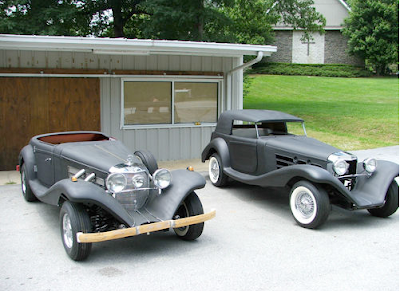 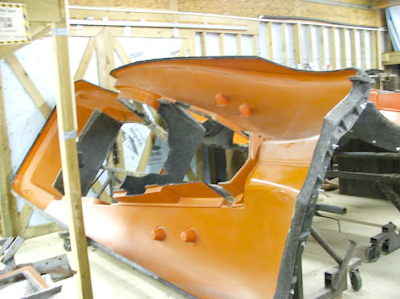 This auction is for the molds to make these replicas plus all the jigs and the two cars.  When you read the description (below), you can see how serious someone was about getting these correct.  The owner refers to an old man who took measurements from cars in a museum to get precise placement of lights, cross bars, tail lights, trim, etc.  It would be an interesting way to get into the custom/hot rod business as I don’t see building pure replicas going anywhere.  A straight six motor or somebody’s twelve would appeal to me more underneath.

“These are two replica cars that were built buy Thoroughbred Motorcar Company Inc.from Washington State and then later in Mount Dora Florida in the early 70 and 80’s that have not been finished yet and were to be used for my project of putting the company back together along with the original mold’s for both the 540K two seater and the 544K four seater and the original frame jig that was designed to be used with both cars that was set up to accept the 1974-78 Mustang II as your donor car for your project.The molds are in great shape and are all on commercial casters and rotisseries for easy moving around your shop including the frame jig.The bodies are a single mold then you have the doors that fit both cars, hood, side hood, trim panels and the floor mold that is used for both cars.Both top molds for the 540K and 544K are also on casters and rotisseries in great shape.The 544K four seater with the full hard top, is the least finished car of the two.It does have the 302 Ford and  a automatic transmission with the Mustang II front end with disc brakes.and six knock-off wire wheels, grill , front and rear bumpers with bumper shocks, mounting hardware, door hinges , door handles, windshield frame, radiator, headlight assembly, gas tank,trunk lid and taillights.The 540K two seater is the the closest one to be ready for the road or use for your show car as i was planning.The 540K was bought from a 80 year old man in California that had access to museum cars and concourse cars to take pictures and measurements to duplicate the original headlite mounts and cross bar, taillite spears for mounting the rear taillites, chrome trim that runs down the hood, cowls, doors and a small body piece behind the doors.Molds were made for the above items by the gentleman then he had them casted  from brass and then chromed to be pretty close to the original look including the wooden bumpers for a templete for the next person to have them made.The 540K has had the complete frame off work done with the Ford 302 engine and drive train,chromed front coils, rebuilt front end, brakes.The engine has never been started and moves freely and that is all i can tell you.The billet package of engine parts, including the a/c, power steering,power brakes are all been polished or chromed and look brand new. I have a new chromed steering collum with a new wooden steering wheel, Classic Gauges, Mustang seats, heater system , windshield wiper motor assembly, new electric window motors and cables, six wire wheels and tires, four spare tire fiberglass covers for both cars.I have two original 11″ x 17″ Assembly Manuals that came with your kit when it was delivered to you.The molds do not have any holes for your spare tires in the fenders when they are pulled from the mold.Those were options for the extra two wheels and tires with chrome side mounts.The cars looks very close to original with out the side mounted spares and lowering the rear was something i was planning for the the second generation look for 2011.This business opportunity if you are a car guy or guys looking for a project for yourself or a father,son business is ready to move forward and you can go with the original cars as they were done in the 80’s or if you would like to go with  the very cool hot rod look with the suicide doors or the real original look i had in mind by lowering the car, the clean fender look with out the fender mounted spares, a/c, a beautiful paint and interior make over. If you have any questions ,i have lots of pictures i can send you ,or come and take a look. I have original brochures, ads, order forms, lots of cool stuff. I have bought a new business not car related and this is not my priority at this time. I would like to see it carried on by a car person like my self.  I also have a friend that hauled the two cars from the California and the molds from Florida that is very reasonable and can give you a quote for shipping.”